I found this article below about a 15 year old french fry that was sold on ebay for $10.50. Not much, I guess, but it’s kinda weird… Maybe I can get a little more for my 30 year old box of Jello. 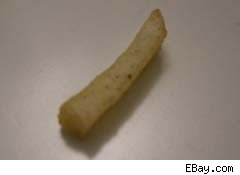 While we (sort of) understand why people pay a little more for a bottle of wine that’s improved with age, we’re not quite so sure about the speculative value of an aging French fry.

Still, there’s a kind of earnest enthusiasm about this eBay ad for “the only known 1993 [McDonald’s french] fry in existence,” as though it is something that anyone will realize the innate value of.

Evidently, the owner was 15 years old when he originally spilled some fries in his father’s new SUV. One of the fries was left under the seat on purpose to “christen” the car, and it remained there, untouched for the lifespan of the vehicle. Now that his father is buying a new car, the fry is being sold like the treasure it is, with 20 percent of the proceeds going to Ronald McDonald House.

The specs: “About the Fry: it is roughly 1 inch long and hard as a rock. Per eBay rules this is not a food item and is only meant for display, I mean do I really have to say that! Put that ketchup down.”

While there’s still time to bid the fry up until this evening, bidding so far has been a bit tepid — as of press time, the fry seems to be garnering only $6.50 worth of enthusiasm.

UPDATE: The famous fry eventually sold for a meager $10.50, surely a disappointment for vintage fast food collectors. Still at that price, the seller could buy around five cartons of fresh fries, with about 40 fries each, meaning that in 15 years he could have 200 vintage fries on the market — and make a cool $2,000 as a result. This man is a genius.

Think the fry is disgusting? Try it on a pizza.