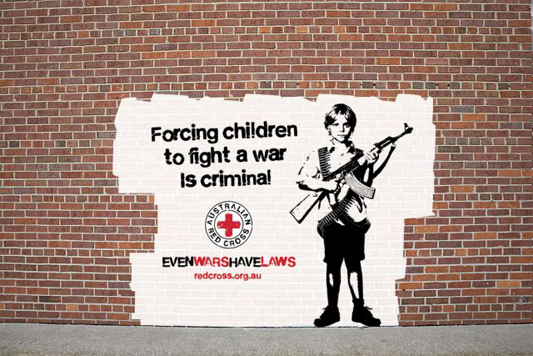 Around the world, Red Cross promotes the non-recruitment and non-participation in armed conflict of children under 18.There are an estimated 300,000 children engaged in combat around the world. Imagine someone’s child or grandchild is being forced to hold a weapon … to take part in atrocities that no child should have to witness, much less participate in.

Children are recruited as they may be more obedient and easier to manipulate than adults, and less aware of the danger they are in.

The immediate effects of armed conflict on children can be devastating and the long-term psychological damage that can be done is severe. 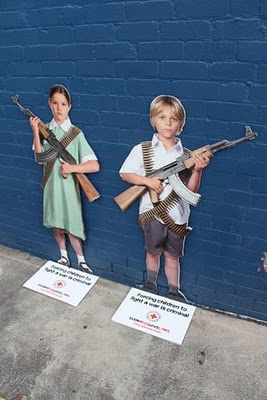 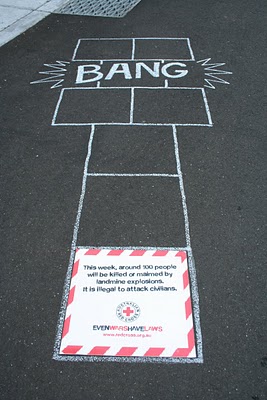 Children under 18 cannot be forced to sign up, and if they volunteer, they still can’t take part in the fighting. The 2000 Optional Protocol on the Rights of the Child on the involvement of children in armed conflict aims to raise the age to 18.

Around the world, Red Cross promotes the non-recruitment and non-participation in armed conflict of children under 18.

For child soldiers who want to go home, Red Cross can help them reach their families safely and also assist with the rehabilitation and reintegration of children in their communities.

The global Red Cross network helps to reconnect relatives and loved ones who have been separated by armed conflict, distributing messages between families, political prisoners and prisoners of war, and helps to clarify the fate of the missing.

Today there are an estimated 300,000 child soldiers playing an active part in as many as 19 countries. This practice has made ‘child soldiers’ a household term today.

Child soldiers can be as young as seven years old. Yet equally concerning is the plight of 16 year olds who face difficulty reintegrating into their communities after missing out on any chance of schooling and a normal childhood.

Because children are often unarmed and used in different roles (messengers, porters, drivers), the term ‘children associated with armed groups’ is often used by Red Cross and other organisations.

UNICEF brings shocking reality to the streets of London